Brooks Powell is the creator of Thrive+, an after-alcohol aid. Powell appeared on Season 9 Episode 24 of Shark Tank. He sought $400k for a 10% stake in his company, but was unable to make a deal.

Powell was an undergraduate at Princeton University, and read about an initial study showing that a substance called Dihydromyricetin could be used as an effective alcohol cure. His neuroscience professor helped him get in touch with a chemical patent law alumnus, who told him that he could acquire a patent if he was able to combine Dihydromyricetin with another substance to create a formula. He was able to create such a substance, which he branded as Thrive+.

Powell had a composed pitch where he compared Thrive+ to an array of products used regularly in conjunction with other activites, such as seat belts with driving, and sunscreen with spending time in the sun. He tried to position Thrive+ as something which would regularly be taken with alcohol. Unfortunately, the pitch quickly derailed, because some Sharks were irritated by the necessarily scientific nature of his pitch, and other Sharks (especially Mark Cuban) appeared to have had a bad day and took it out on Powell. After some heated debate, all the Sharks quickly went out.

Powell is continuing to work from Houston on Thrive+ with a team including his wife, Shelby Ogletree, and his friend Hank Holcolmb.1 While Powell was unable to secure a deal on Shark Tank, the appearance on Shark Tank was a huge boost for Thrive+, which received $10,00 visitors to the website within 10 minutes of the show ending, and generated $1.1 million in sales in March alone.2 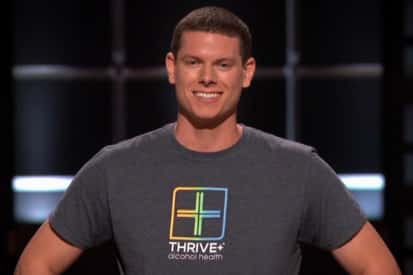