Thrive+ is an after-alcohol aid created by Brooks Powell. Thrive+ was featured on Season 9 Episode 24 of Shark Tank. Powell sought $400k for a 10% stake in his company, but was unable to make a deal.

Thrive+ had a poor reception on Shark Tank. Mark Cuban was convinced before the pitch began that Thrive+ had to be exaggerating its claims, and rarely gave Powell a fair chance at developing his pitch. Because of Powell’s difficulty taking control of the pitch, he was unable to get into Thrive+’s financial figures or comparison with the competition in any detail, and so all the other Sharks quickly went out in sequence.

Despite the inability to make a deal, the appearance on Shark Tank was a big boost for Thrive+. More than 10,000 visitors went to the website within 10 minutes of the show ending.1 In March, Thrive+ generated $1.1 million in sales, and hopes to hit $25 million in total revenue across all years by the end of 2018.2 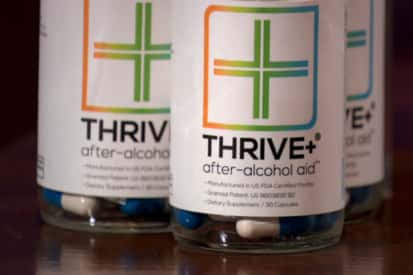